Creation of the Fire Department

Cameron Fire Department's history began after the business district fires of 1870 and 1871. During that time, there was a man who pushed a fire cart called the Water Witch. Captain O.P. Newberry was the foreman of the machine.

In 1883, an organized Fire Department with uniforms came into existence and was named the Queen City Fire Department Number 1. This Department purchased Cameron's first fire apparatus. The authorities recommended a heaver machine, but since there was only one paved street a heavy machine would be wrecked after several fires. The Queen City Fire Department practiced shooting water over a two-story building several times before they could use the machine in a real fire. The first real fire came three months later. After running about a quarter of a mile and rolling out 500 feet of hose, they realized they had forgotten the nozzle. The whole force returned back to retrieve the nozzle only to find the building was engulfed with flames. The Department was able to save surrounding buildings from further damage.

The first firehouse was located in the basement of the Shaw's Skating Rink. There was a large bell on top of the building used for fire alarms. This building burned in 1888, the hose was ruined by the time the firefighters could get into the basement.

Water was furnished in the early days by cisterns located on Third, Cedar, Pine, Chestnut, and Walnut Streets. The first motorized tru 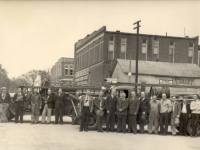 ck was bought by public subscription in 1918. The truck was a chemical wagon, a Mitchell. Later, the ladder truck and the old Hale fire equipment were purchased.