History of Music in Cameron 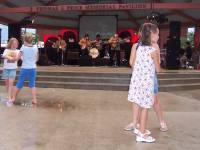 Commencing with the formation of the Cameron Silver Cornet Band in 1866, Cameron has been home to a succession of fine musical organizations. Early groups were typically all male with performances involving marching and drilling as well as playing. As generations came and went, there were several reorganizations and name changes.

In 1929, the citizens of Cameron imposed a tax upon themselves to support their community band. The State statute which authorized this tax stipulated that bands so supported be called municipal bands. At that time Cameron’s band was called Cameron Community Concert Band, so it changed to the Cameron Municipal Band to meet the new requirement.

In a 1934 Kansas City Star editorial, clarinetist D.K. Harper was praised for his community service for playing 58 consecutive years in Cameron’s bands, from 1876 to 1934. Mr. Harper, a one-time buffalo hunter and musician with the famous Gilmore Band, continued playing into his 60th season. Ripley’s Believe It or Not recognized Mr. Harper in their publication for his achievement.

Other musicians who have logged 50 or more years with Cameron’s bands are Bernard Althouse, Dordie Bowen (grandson of D.K. Harper), Albert Hamlet, George O. Harris, and Thomas J. Price. Over 800 musicians have participated in Cameron’s community bands - a number which is steadily growing as research uncovers additional names from the early years and new people join our organization.