Animal Control’s first priority is to ensure public safety. This is done by containing animals that are wandering throughout the City. Picking up stray animals not only avoids the chance for harm to come to a citizen’s pet but it also decreases the chance that someone will get injured by that animal.

Linda Griffin's Precious Pets, Animal Care Facility was dedicated on October 16, 2020.  The City's need of an updated facility had been discussed and researched for many years.  Finally, with a significant donation from Bob F. Griffin, the new facility was constructed and dedicated in the memory of Mr. Griffin's beloved wife Linda Griffin for her lifelong love of animals.

According to state laws, the City must keep an animal five days and a Saturday. After which, the animal becomes the property of the City of Cameron. All of our adoptable dogs and cats are fully vetted. To see an updated list of our available dogs and cats, check out Adopt A Pet  using Cameron’s zip code 64429. 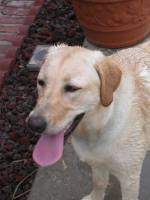