Concert in the Park

The Cameron Municipal Band offers a Concert in the Park series each year beginning Memorial Day then each Thursday evening through the first Thursday in August. These FREE Concerts are held in McCorkle Park at the Thomas Price Pavilion at 8:00 pm.

The Cameron Municipal Band performs at the Thomas J Price Memorial Pavilion. This pavilion was dedicated August 2, 2001 during the Band’s final seasonal performance.

The Pavilion was erected in honor of Mr. Price, who began playing piano at age seven and was entrenched with a passion for music throughout his lifetime. Tom was a member of many bands through the years in addition to the Cameron Municipal Band. He was a band teacher at Maysville then Cameron schools, respectively, from 1948 until 1977. Thomas Price took over direction of the Municipal Band in 1963. 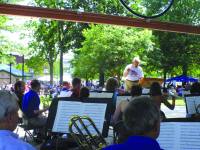